The Jim Henson Company's patented The Henson Digital Performance Studio or HDPS, allows puppeteers to bring digital puppets to life in real time. The system's combination of hardware and software allows a puppeteer (or a primary puppeteer and assistants) to perform live three-dimensional computer graphics as well as animatronic characters. In computer graphics applications, the system allows for an unprecedented level of spontaneity and interactivity when compared to conventional forms of computer animation.

The animation can be broadcast or streamed, taking advantage of either local digital networks or the global Internet infrastructure, and can be applied to web-broadcasting, computer games, television and film.

Behind the scenes videos

The system consists of three major components including mechanical hand controls, a control computer and a digital puppet workstation, which renders the live on-screen image of the character. The final product allows animation to be merged into computer-generated environments in real-time. The system’s animated characters are also “directable,” and therefore the animation can be used as a pre-visualization tool as well as a final product.

The technology also features virtual multi-camera capabilities that allow traditionally trained live-action camera operators to “shoot” the show within a virtual environment and a director to block and select camera angles and movements as needed. 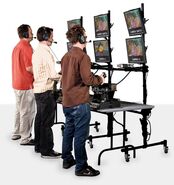 Virtual cameras
Add a photo to this gallery

The HDPS is partially based on the company's earlier Henson Performance Control System (also known as "Big1"), various versions of which were developed beginning in the late 1980s to control complex animatronic puppets. The system consists of three major components: mechanical hand controls (still called a "Waldo"), a control computer, and a digital puppet workstation which renders the live on-screen image of the character. One version of the system won an Academy Award for Technical Achievement in 1993.

Jim Henson's first successful use of the the real-time technology he hoped to develop was with the character Waldo C. Graphic (though then, the final animation was touched-up by Pacific Data Images over the original puppeteered movements).

Retrieved from "https://hdps.fandom.com/wiki/Henson_Digital_Performance_Studio?oldid=4824"
Community content is available under CC-BY-SA unless otherwise noted.